Beginning in April 2018, Deborah Ramos will be facilitating a poetry reading on the last Sunday of each month at 2pm. This one hour poetry reading is open to all poets and is a safe place to share your work and enjoy a hidden corner of our beloved Balboa Park.  If you would like to reach Deborah directly you can email her at debzzo@yahoo.com
If you cannot make a meeting feel free to visit the bench to daydream, rest, meet friends or have lunch, stop by to linger,
you may just make a friend.

Bench repair days are planned when needed. If you would like to help repair the bench, write us in the contact form.

Poets say bench has value that goes far beyond words 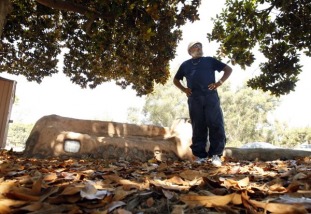 BALBOA PARK — Even a place as well-known as Balboa Park holds surprises.

Near the intersection of Quince Street and Sixth Avenue, under magnolia trees, there's an odd-looking earthen bench complete with a tail. In the front is an opening, for the deposit of poems.

The Poetry Bench was built three years ago by about 20 women, all of them novices in construction. Average age: 50. They used straw bales, sandbags and an adobe-like mixture called cob, which they mashed with their feet.

Candace Vanderhoff, a green-building expert who directed the project, said the idea was for the bench to last about a year, and then for it to be taken down, its materials returned to nature. Recyclable art.

But people like the bench. Poets gather there on the first Sunday of every month and read their works out loud. Others put anonymous verse in the slot. Some sit on it and eat lunch. Kids walk up and down the tail.

“Lots of sweet moments at the bench,” Vanderhoff said.

And this afternoon, it will be the site of the 10th annual Poetry & Prose in the Park, a two-hour public celebration of words. It's one of those quirky summer happenings that helps give San Diego its flavor.

The event, which typically draws several dozen people, is a throwback to ancient times, when storytelling was the way a culture passed along its traditions and morals, its fables and myths.

“Storytelling was poetic, if not in the poetic form, and it's how all this started,” said Megan Webster, a Welsh poet who lives in Rolando and helped organize the first Poetry & Prose gathering.

She's noticed a surge in interest in poetry readings. “There's more demand for it as we become more troubled in our culture and in our politics,” Webster said. “It's a way for people to share their inner feelings. Poetry sustains us in difficult times.”

Jihmye Collins, a local poet and artist who is hosting today's event, detects a “strong pulse” in the poetry scene. He said public readings are a way for writers “to get a greater sense of what they are trying to express.”

People will be reading poems and prose — the latter a short excerpt from a novel, an essay or maybe a chapter from a memoir, he said.

Reading, that is, if they get up the nerve. Not everybody is comfortable sharing something they've written out loud, especially poetry, which is famously and intentionally oblique. (Poet Carl Sandburg once said, “I've written some poetry I don't understand myself.”)

Judy Reeves, executive director of San Diego Writers, Ink, a nonprofit support group that is sponsoring the event, said she sometimes jokes that reading your own work aloud is, “Like standing in front of a group, taking off all your clothes and saying, ‘What do you think?’ ”

But the Poetry Bench has a way of soothing people, Vanderhoff said. After it was built, she would sometimes sit in her car nearby and “watch people interact with the bench,” eating lunch, sleeping on it, writing.

Every couple of months, she goes by and collects the poems that have been dropped in the slot. Her hope is to one day publish a book featuring poetry from the bench.

“I think it's the casual nature of the setting,” she said. “It's a safe place for people to share what they've written.”

After she got permission from park authorities to build the bench, she put out the word for volunteers, and 22 showed up. “I felt like I hit a nerve,” Vanderhoff said. They built the bench over four weekends.

An errant sprinkler early on made the straw bales grow, turning her creation into a Chia Bench. She worked with teens from a local homeless shelter to make repairs.

“It was only supposed to be there for a year,” she said. “We could take it down, but nobody's asked.”